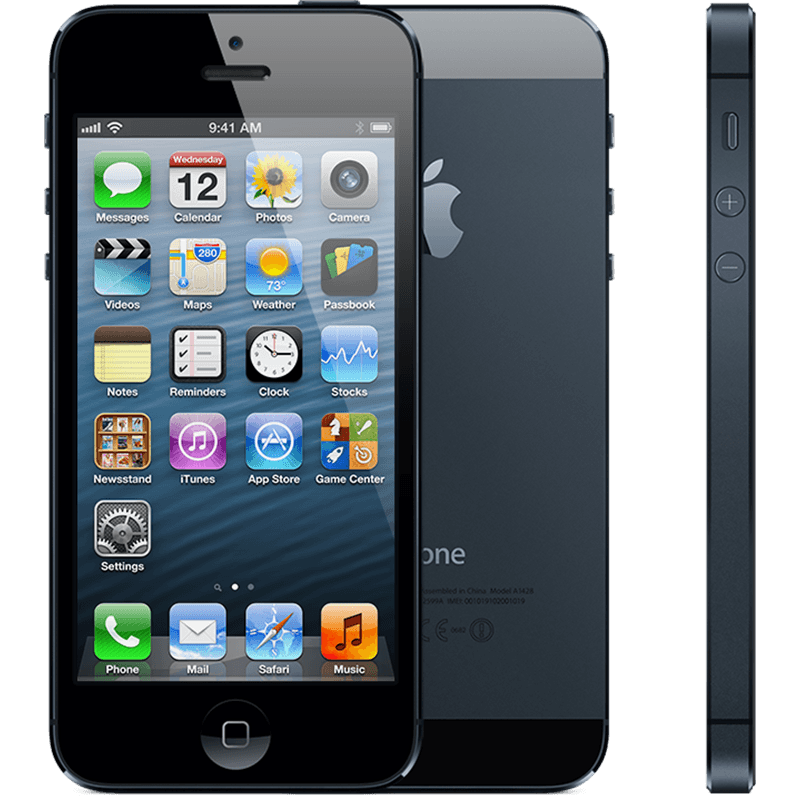 Thank you techradar.com for the information for this post.
The excitement of the rumor mill, the titillation of every leaked photo led to higher than ever levels of expectation for the iPhone 5, and while the announcement was greeted with some derision at the lack of perceived headline improvements, the record sales tell an entirely different story.
Given the underwhelming changes to the iPhone 4S, the iPhone 5 really needed to re-energize customers to prove Apple can repeat the game-changing trick it managed with the iPhone 4.
We'll begin in the traditional manner: how the thing actually feels in the hand. With the iPhone 5 there were many types of prospective buyers: the upgrader from the 4 (or more-money-than-sense iPhone 4S upgraders), those tired of their Android handset and those taking their first steps in the smartphone market and want to get one of them iThingies their friends has.

Well, all of those picking up the iPhone 5 will have the same reaction: this thing is amazingly light. You've probably heard the numbers by now (20 percent lighter than the predecessor, as well as beating most of the opposition too at 112g.)
It's an odd sensation, but it actually detracts from the experience when you first pick it up. We've praised the weighty feel of the iPhone in the past, lending it a premium feel in the face of toy-like phones, and it's almost disappointing that Apple decided to join that clan.

However, through extended use this problem quickly disappears, as the overall effect of the phone is still a chassis designed for strength, it just sits more anonymously in the pocket.

You'll obviously see the change in height, too – the iPhone 5 stands 4.87-inches tall to allow for the larger 4-inch screen. In truth, those not familiar with the iPhone 4S probably wouldn't notice the difference, which is why it's a good move from Apple to include the larger screen if it's not going put people off that hate larger phones.

The decision to stick at 4-inches is Apple's admission that while it recognizes people are all over the idea of having more screen real estate to play with it doesn't want to move away from the thumb-friendly nature of the device.
Through a mixture of moving the centre of gravity slightly as well as repositioning the screen within the bezel, it's still possible to scroll your thumb mostly around the whole display one-handed, which Apple is clearly keen to keep hold of.

However, we're not convinced of that argument any more, and the power button was still a little out of reach when using the phone normally, as was anything in the top left-hand corner of the screen.
This was no issue in reality, as scooting the phone down a bit in the palm is a natural action. But if that's the case, then why not offer a 4.3-inch screen at least?
There's more to a phone than a screen these days (although increasingly less and less) and the general construction of the iPhone 5 is excellent to say the least.

We've tested both the ceramic white version and the anodized black, and the two-tone effect on the back of the phone is stunning, both visually and under the finger.

The two sections of pigmented glass at the top and the bottom of the phone add a pleasant effect, and the sapphire glass is meant to be thoroughly durable, to complement the Gorilla Glass on the front.
Apple knows consumers get furious when they drop an iPhone, and is clearly seeking to stop the smashes before they happen with a tougher exterior - although it seems the anodized black version is more prone to scratching, which means, sadly, you'll have to think about getting a cover for that beautiful frame.
The same industrial band around the outside is in effect again as on the iPhone 4 and 4S, with small sections removed where the antenna joins.
Apple has gone for a more advanced form of antenna here, meaning the days of lost signal are gone, and generally increasing the power of your call connection and GPS lock on, too.

zYou can buy an adaptor, but it's going to be pricey: $30 when it lands in October. And unless you want to keep it permanently attached to the bottom of your iPhone 5 you'll need to buy a few, which is far from ideal.
However, let's not harangue Apple too much for this: a smaller connector is not only easier to use (you can plug the smaller cable in either way round, and the connection feels more solid), but you're rewarded with a thinner and more compact phone to boot.

The decision to move the 3.5millimeter headphone jack to the bottom is an odd one, as while it allows you to slip the phone into the pocket head-first when listening to music, which is a more natural action, it's a real pain in the posterior for some apps that will only work in landscape a certain way up.
Using it this way means your headphones experience will be one of having to jiggle the jack around two fingers.
It's not the most comfortable way to hold a phone, and even when using the phone in portrait mode, the jack gets in the way somewhat.
There are other smaller design changes to the iPhone 5 too, such as the iSight front-facing camera moving to the middle and the home button being noticeably more robust to help reduce instances of a broken portal to your home screen.

But enough about what the phone looks like - the killer question is how the thing feels in hand. We'll sum it up by saying this: smooth. It's a little slippery, and we were always worried we would drop the darn thing.
But that's the only negative thing about the design (apart from the low weight initially) as it sits in the palm nicely and allows you to do it all with one hand, including hitting the top-mounted power/lock button with ease.
That lock button is actually still loose, as it was on the iPhone 4S, meaning when you shake the phone around you can hear it clicking away, which undoes a lot of the premium feel Apple is going for.
Make no mistake, the iPhone 5 is one of the most beautifully crafted phones out there - but when you're paying $199 up front for the thing, we'd hope this would be the very minimum Apple would do.

And while it looks nice, from the front it doesn't really add much to the design of the iPhone - it's certainly not the same as the jaw-dropping design of the iPhone 4 compared to the 3GS... it's just another evolution in the iLine. It's not bad, but for those that hoped the iPhone 5 would be another big change there's a good chance they'll be disappointed about the look... until they feel the lovely back.
There was a real chance here for Apple: remove the bezel and give the front of the screen a look that's similar to the OLED TVs from the likes of Samsung or LG… but instead we're treated to the same lines as before.
You always get the feeling that Apple saves what it can for the next iteration of the iPhone, and while there's nothing wrong with the current construction we can see the edge-to-edge screen becoming something amazing on the iPhone 6.
Posted by Unknown at 3:49 PM 1 comment: 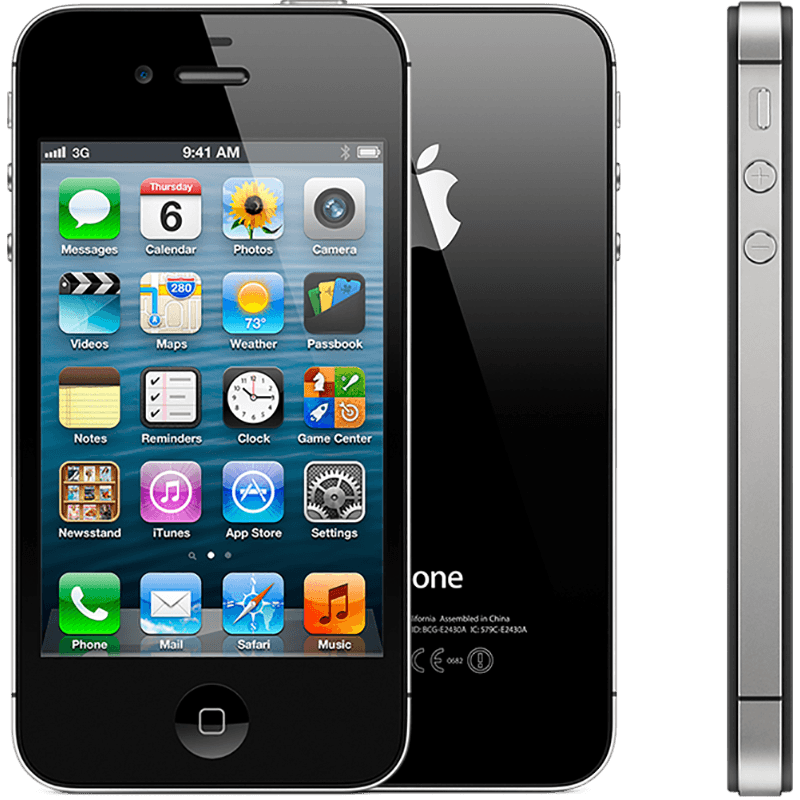 I would like to think I More.com For this wonderful article.on the iPhone 4S.
Nothing about 2011 was normal for Apple. Tim Cook had introduced the Verizon iPhone 4 at the beginning of the year and Apple had finally shipped the white iPhone 4 by spring. But unlike previous years, WWDC 2011 came and went with nary a mention nor a glimpse of a new iPhone. Steve Jobs went on medical leave again, and in August resigned as CEO. He passed away on October 5, 2011. Just the day before Apple's new CEO, Tim Cook, SVP of Marketing Phil Schiller, and other executives valiantly took the stage at a special media called "Let's Talk iPhone". There, under tremendous emotional strain, they introduced the most amazing iPhone yet. The iPhone 4S.

iPhone 4s: 16 months in the making

The iPhone 4S, codename N94 and model number iPhone4,1, for the second time, kept the same basic design on the market as the iPhone before it, concentrating instead on improving the internal components. It was the first indication Apple was following a "tick tock" product cycle with the iPhone. For the iPhone 4S, it meant the same 960x480 326ppi Retina display and IPS LED panel. It also had the same composition, with two layers of chemically hardened glass sandwiched on either side of a stainless steel antenna band.
The antenna band itself, which had proven problematic on the iPhone 4, was improved. It had the same configuration as the Verizon iPhone 4, but Apple split it into two components and enabled it to intelligent switch between transmit and receive to avoid attenuation and detuning both. Even while on a call. While CDMA EVDO Rev A data speeds had already been maxed out - given slow it was to begin with - Apple boosted the UMTS/HSPA speed to 14.4mbps. (They refused to humor the idea that there were "4G" speeds, however.)
The new Qualcomm RTR8605 chipset was dual-mode, however, so even the Verizon (and later Sprint) CDMA models could work on GSM internationally, making the iPhone 4S Apple's first "world phone".
Wi-Fi stayed the same at 802.11 b/g/n on 2.4Mhz, but aGPS was augmented by Russian GLONASS (Global Navigation Satellite System), and Bluetooth jumped to 4.0 with support for both high-speed (HS) and low-engery (LE) modes. Typically radio-conservative Apple was making a big bet on the future of Bluetooth, and none at all on NFC (near-field communications).
As was becoming the pattern with S-class upgrades, the processor got a significant boost - a version of the Apple A5 system-on-a-chip (SoC) that debuted with the iPad 2 earlier in the year. The A5 featured a dual-core Cortex A9 central processing unit with Imagination's dual-core PowerVR SGX 543MP2 graphics processing unit. Apple claimed a 2x general speed improvement and a 7x graphics improvement.
Apple stuck with the same 512MB of RAM, however, but did introduce a new 64GB storage option. The battery got a slight improvement as well, up to 1430mAh, but it resulted in 8 hours of usable battery life for 3G talk, but a reduction in standby time.
An infrared sensor was added to enable Siri's raise to speak feature, but otherwise the sensors remained the same.
The front-facing camera retained the same, paltry VGA sensor. The rear-facing camera, however, got a lot of attention. It was increased to 8 megapixels and 1080p. The backlit sensor was improved, the aperture brought to f2.4, and made wide angle to capture more of a scene. They also added a 5th piece of glass to the assembly to increase sharpness, and an infrared filter to improve colors. The bigger news was the ISP (image signal processor) in the Apple A5 processor. It took the images captured by the camera and provided facial recognition for more specific automatic focus, and post-processing for much better white-balanced, stabilized, photos and video. It did, however, seem to find macro focus more of a challenge.
Pricing again stayed the same, starting at $199 and $299, with the new, larger capacity model sliding in right on top at $399.

iPhone 4s: The cross-roads of technology

The iPhone 4S launched on October 14, 2011 in the U.S., Australia, Canada, the U.K, France, Germany, and Japan. It reached 70 countries and 100 carriers by the end of 2011. It sold 4 million units the first weekend.
Steve Jobs was gone, but his greatest product, Apple, remained. The iPhone 4S entered a market facing greater, more relentless, and savvier competition than ever before. Still, it established the iPhone as Apple's new holiday product, and it once again sold more than any iPhone before. It was a painful, combative, heartbreaking year for Apple, but they endured.
Posted by Unknown at 12:29 PM 1 comment: